Just testifying for the arts, people.

City Council Testimony to the Joint Hearing of the

Committee on Small Business, and the

On “The Purchasing Power of Culture: How Cultural Organizations Support NYC Businesses”

I’d like to thank the members of the council for the opportunity to offer testimony today to this joint hearing of the Committee on Small Business and the Committee on Cultural Affairs, Libraries and International Intergroup Relations regarding “The Purchasing Power of Culture: How Cultural Organizations Support NYC Businesses.”  I’m particularly pleased to thank the two committee Chairs, Council members Jimmy Van Bramer and Diana Reyna, for their longstanding dedication to these issues and to convening this forum today.

My name is Michael Hickey.  Many of you know me from my former role as executive director of the Center for NYC Neighborhoods and my work coordinating citywide foreclosure prevention efforts to improve neighborhood stabilization.  I’ve testified before the Council many times, and you will recall that I’m a fan of numbers, charts and graphs.

I’m testifying today in my role as a member of the Naturally Occurring Cultural Districts Working Group, and as an independent researcher who has conducted analysis on NYC cultural organizations and their economic profiles.  I’m pleased to have access to data provided through the Cultural Data Project (CDP), a national initiative which in New York State and New York City gather a wide array of financial information from nonprofit cultural organizations applying to access public funds.

The data provides a number of useful indicators regarding the impact of NYC’s cultural practitioners on the arts.  The first is that the overwhelming majority of cultural organizations in this city are quite small, averaging about $250 thousand per year in annual income.  This chart shows the revenue distribution for the 2010 data set. 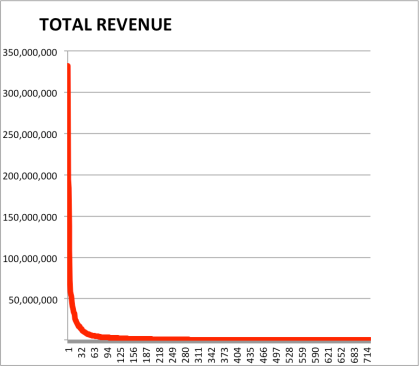 As you can see, a very small group of cultural organizations generates an enormous amount of income from public sources, private philanthropy and earned revenues.  While interesting and worthy of further investigation, the reason I include this chart is to show that the nonprofit cultural sector is overwhelmingly composed of small organizations whose focus is on the local geography, the local arts scene, the local audience, and the local economy.

The image below, taken from the Municipal Art Society’s Arts Digest 2012, shows the distribution of the cultural organizations receiving public funding.  Note the concentration in central and lower Manhattan, compared to the much sparser distribution in the other four boroughs.  Again, this is not a surprising finding, but an important indicator of how public sector funds are finding their ways into our developing neighborhoods.  I believe that Arts organizations who’s primary focus is on appealing to an audience constituency interested in their creative work, tend to towards locating in Manhattan where they believe they can have the most success in attracting those audiences.  I likewise believe that many of the cultural organizations located outside Manhattan tend to curate work more focused on the unique needs and interests of their immediately surrounding communities.

The CDP does collect an enormous amount of information about how NYC nonprofit cultural organizations spend their money.  We know, for instance, that of the 750 some nonprofit culturals tracked in CDP for 2010, they spent approximately $3.5 billion.  Unfortunately, as far as I’m aware, no formal study of this data has been conducted to estimate the total spend, and to break down that total spend according to the available expense categories (including catering and food costs, equipment rentals, advertising, security, and so forth), or by other variables such as organizational size, discipline and location.  While the data does not tell us where the purchases of goods and services were made, it does provide some dimension to how much economic activity the cultural organizations themselves generate.  I would further suggest that, since most organizations are small and locally focused, they tend to use local businesses to meet their needs.  Within our NOCD Working Group, we have a number of examples that support this assumption:

The Greenpoint Manufacturing and Design Center manages approximately 600,000 square feet of industrial space in New York City. Those buildings house over 100 small manufacturing and artisanal businesses which together employ more than 500 workers.

Fourth Arts Block conducts a wide variety of what can only be called Lower East Side business boosterism activities, including one of the most diverse and compelling annual cultural and small business festivals in the city, local restaurant tasting tours, coordinating free energy assessments and incentives for local business owners, and holding their annual “Load Out” event – allowing people to swap still usable equipment while simultaneously diverting reusable and recyclable items from the waste stream.

The Queens Museum measures that it spends approximately $1 million annually on goods and services provided by local businesses, including events catered by local eateries like Tortilleria Nixtamal in Corona, Delhi Palace in Jackson Heights, and Spicy and Tasty in Flushing; or ordering exhibition supplies from Mensch Mills or Beplat Hardware.  The CIG itself, including 33 of the largest cultural organizations in the city, estimates that it spends $600 million with local vendors.

Betsy Immershein, a consultant who specializes in both sustainability and supports to nonprofit culturals, reports that just one of her clients based in Long Island City works with over 80 businesses in the surrounding community.

And of course groups like The Point CDC and El Puente are well known for their work in incubating local creative sector businesses, and using community development and local organizing strategies to engage both businesses and artisans in making their work both more accessible and commercially viable.

But there’s something else I want to point out.  Nonprofit culturals in New York City are different from their nonprofit peers in that on average they generate more than half their income from earned revenues.  For most nonprofits, the average is far lower – usually in the neighborhood of 10-15%.  These same organizations earned their bread and butter through a combination of ticket sales ($437 million), classes and workshops ($77 million), touring ($45 million), concessions ($34 million), space rentals ($83 million) and many other types of entrepreneurial activity.

All this is to say that not only do nonprofit culturals exist as economic engines on their own, attracting audiences, students and other cultural practitioners, many of them have also taken on the work of building the economic vitality of their local businesses because they seem them as partners in their overall economic well-being.  These are groups who:

This work is happening within community-based cultural clusters all around the city now, but it’s largely unseen and certainly under-supported.  We must develop strategies as a city that allows us to recognize and support creative clusters.  We must:

We already know enough to affirm that creative clusters have a deep and lasting impact in their communities.  Indeed, in many cases they are already connected to or even embedded within networks of local small business leaders, community development partners, advocates and organizers.  It’s time we made it official, and it’s time we made it stronger.

I thank you for your time and I look forward to any questions and comments you may have.