It can be hard to not feel frazzled.

As I was saying, there are plenty of people who want to give your organization money.  Seriously.  Lots of it.  There is, of course, a catch: you have to give it back.

Understandably, this stops most nonprofit executive directors in their tracks.  It’s no mean feat to raise the prodigious amounts of grant funding needed to run one of these juggernauts as it is.  It requires stamina, persistence, a LOT of friends, and just a touch of maniacal charm.  Now, the frazzled ED asks, you want me to spend a huge amount of time raising money I have to pay back?

I hope this is all reason enough, but let me add one more very important one: you’re supposed to do it.  For all their talk about the importance of leadership and investing in innovation, all resource providers (foundations, social impact investors, even commercial lenders) are followers.  They react to market trends that appear on the ground, the cumulative energy and activity made manifest by the things you tinker with and learn to do better in your daily work of achieving your mission.  People with money need you to tell them where, when and how to, you know, stick it. 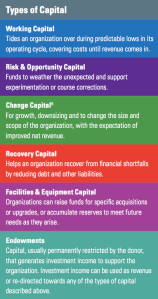 Aren’t you excited?  Brave new world and all that?  Well, let’s talk turkey.  In my previous post I wrote about finding new ways to draw linkages between your existing and potential capital plans.  Let’s go back to that little chart I stole from the lovely folks at the Nonprofit Finance Fund.  Most of the capital concepts in this chart are in fairly common use.  Terms like working capital, endowment, facilities & equipment capital – these are all things we talk about, and use, right up there with lines of credit and bridge financing.  The capital types in the chart can come in several different flavors, including grants, commercial investments, or social impact capital.

What I like about this chart is it lays out uses of capital directly related to the activity being supported, and illustrates that capital is carved into buckets for a reason.  If you want to start up a new program or project, you know that you will need some change capital to invest in the fleshing out of the enterprise.  After that, you’ll want to access risk capital or facilities capital to lay the foundation and build things out, then working capital to keep the lights on, and so forth.

So here’s my question to you: when was the last time you sat down with your financial manager and thought through the developmental phases of key new developments, and actually considered the various tranches of capital you would need?  Leaving aside physical infrastructure (affordable housing, a school, a community center, new offices), I suspect many nonprofits aren’t in the habit of staging their capital needs.

And this is the point:  if you’re smart enough to think up a major cost savings initiative or revenue generating activity, then you’re definitely smart enough to think much more aggressively about how you can use grants, social impact capital and commercial capital in combination to see you through.  What’s more, many complex nonprofits have some ability to tier capital already at their disposal or through their stakeholders into credit enhancements that will provide incentives for other investors.  This is the stuff that dreams are made of, and for many its well within their grasp. Think about it.

OK, I’ve gone on too long.  I hope to write more about the most recent entrant into this rubric, the concept of “change capital.”  (Credit goes to folks like Rodney Christopher over at the Heron Foundation who have been doing some terrific thinking and organizing around this idea.)  I’ve been asked to pull together a panel for an upcoming social impact conference in Austin, Texas (early 2014 – stay tuned) and I hope this will be the focus.  And if you happen to be going to the Social Impact Exchange Conference today, then look for me there.  I’ll be the one with the nice shirt and tie combination.