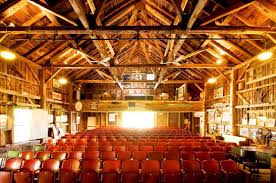 Dear Reader, About a year ago the Naturally Occurring Cultural Districts (NOCD) working group asked your Man About Town to write a nice, juicy case study about what happens when cultural organizations buy non-cultural facilities and fix them up.  This three part series details my findings, although it’s well worth checking out the original report to see case studies from nearly a dozen cultural organizations across the country.  Check out Part I of this series to learn more about the unique opportunities and challenges of adaptive reuse.

You may also want to visit the Tumblr site I set up for this report, which includes additional links to a variety of additional resources for cultural organizations seeking their first home.

Perhaps a bit literal, but you get the point.

For many nonprofit culturals, their work and their workspace are inseparable parts of a whole. The reasons for this can vary substantially: some culturals need a space suitable for rehearsal, performance, or production; some use their space to create a sense of artistic inspiration; some select their space because its location or disposition helps fulfill a component of their mission. Many spaces satisfy several of these criteria or address still other considerations.

There can be no doubt, therefore, that for many adaptive reuse developments the site itself is a key driver behind the effort.

Many adaptive reuse projects involve multiple nonprofit and for-profit partners. Because cultural facilities in general can be costly and challenging to develop, maintain, and program, sharing these efforts makes good sense. There can be substantial challenges, however, in deciding leadership, handling critical decisions, assigning important tasks, and negotiating boundaries. In addition, attempting to change the structure of leadership after the fact is much harder than taking the time to establish it from the beginning.

There were a number of examples discovered in the course of this case study where partnerships were not so successful. The reasons for these challenges were quite consistent:

Why Your Public Needs the Public

Many projects that are developed through adaptive reuse either come into being because their former use served a direct social benefit or because their new nonprofit stewards wish to achieve a social benefit through the new use. In either case, maintaining strong public partnerships throughout the planning and programming stages is critical to achieving the right tenor of public support. This is particularly true when considering the needs and ambitions of the local arts community that hopes to engage directly with the new use.

In addition, very few cultural capital projects – whether adaptive reuse, substantial renovation, or new construction – proceed without public sector support. Money for building derives most often from a combination of community support provided by local elected leaders and direct funding through public dollar capital allocations (which is very much a function of community support). Additionally, a number of the more substantial capital projects referenced, particularly those involving affordable live/work space, also used access to federal funds to support the housing component. Engaging public support means having a strategy of communicating with local elected and appointed officials, including city council representatives and officials in cultural affairs, budget, finance, economic development, and similar municipal agencies. This can sound daunting, but in point of fact many groups reach their public officials through their local city council member or alderperson, who (assuming he or she supports the project) is normally eager to provide guidance.

The Business of Making Art

The Farmington Players. I’m not kidding.

Acquiring and developing facilities for nonprofit cultural use is demanding financially, technically, and programmatically. Operating a cultural facility once you have it built is equally complex. There are many variables (such as creating programs to adequately use the space or handling ongoing maintenance and utility costs) that are difficult to fully anticipate. Many nonprofit culturals see their overall capacity to develop creative engagements diminished in the short term as they allow for and adapt to the administrative and operational needs of the facility. The good news is that once ad- ministration and operations are more stable, the venue actually allows for taking greater risks and dedicating richer resources to creative productions. Having an operational model in mind when moving into a residence significantly increases the likelihood of a successful transition.

Moving into a newly adapted space usually entails a leap in operations—not a slow, steady climb. Many nonprofit culturals recognize that they themselves will not be able to fully program all the facility’s available hours. Building partnerships with other nonprofit culturals whose work is complementary can both better activate the space and bring in needed financial resources.

Stay Tuned for part three of this three part series: the takeaways.